In the beginning was the picture. The picture conjured up reality, perpetuated it and manipulated it in a magical form. That is why it has to be what it is: what it actually contains or what it ought to be to fulfil your desires. Representational art reached its zenith in romanticism and in the representation of idyllic scenes – in the quest for harmony which tried to counterbalance the shock experienced by human beings when they realised that the world is basically unjust. It is unjust to small nations, to men in the street and to children, even if once in a while it gives them some phony concessions. In vain did the Utopians of the period hope, believe and proclaim that technological development and the interests of the masses would bring about some kind of equality. Injustice only increased because the powerful continued to hold power, so they were the ones who profited most from technological development and they were in a position to protect their interests. Only in the world of painting could harmony be achieved on canvas. Pictures also offered the chance to leave reality behind. 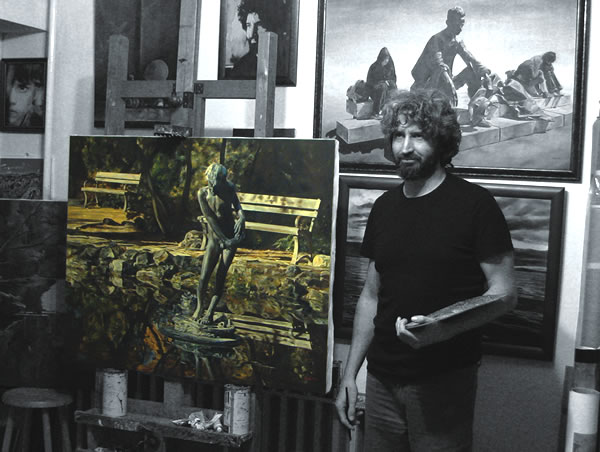 We do not know in which direction the art of painting might have gone if photography had not come along in the middle of the 19th century to change people’s perceptions of fine art. Realistic presentation was defeated for a time and pushed more and more into the background. The period of “-isms” and abstraction began. We believed that photos can reveal reality much more precisely than paintings. We believed that, if a photograph catches a moment of existence, if most of human experience that is not perpetuated in an arranged form is depressing and the world is far away from what we would like it to be, we have to present what we see and we have to accept the lack of harmony and idyll. Longing for them, trying to create them and even representations of them are totally meaningless.

Nearly a century had to pass until this pessimistic style of painting, which came into being in the wake of the shock caused by photography, gave ground to the style of art thst had been rejected in the second part of the 19th century. On the one hand, decoding the newfangled, dominant trends and the exceedingly complicated systems of symbols used in the world of fine art became practically impossible for those not familiar with the ins and outs of the profession. On the other hand, in the process of continuous renewal, art simply lost its message. Some modern exhibitions just gave up the idea of presenting something beautiful to the public and appealed only to a small group of “highly educated” experts. That was not because works of art were made for the salons of noble people but because lay people were simply unable to understand the messages of the works of art on display, if they had any message at all.

At the end of the 20th century several changes led to a revival of the representation of “the perfect”. Paintings which were as detailed as the pictures of classic masters in earlier ages demanded and got recognition. These pictures simply attract attention, even before one fully understands their message. However, they can easily become dilettantish if the artists do not understand the techniques and the materials really well and they are not sufficiently humble and dedicated, so only a few of the best artists accepted this challenge.

In the first decade of the 21st century the “post-realistic” trend had almost no serious representatives. It had a major influence on its recognition, because artistic events all over the world prove that we speak about more than the principle that “everything should flourish”. We speak about a noteworthy and significant trend in the development of fine art which leads to a new point of view, the signs of which we see in several parts of the world. That may be one of the reasons why the painter István Cene gál, who lives in Cered, a small village on the Slovakian border, is better known and respected abroad than in Hungary. His oil paintings are in international auctions, exhibitions, catalogues and albums of art. It is no coincidence that he receives commissions mainly from abroad.

The role of an album is to present a list of the works of art made by an artist, which give a kind of vertical and horizontal section of the artist’s development, and to show his most important masterpieces. The masterpieces to be shown are the ones that take us along the road which the visual thinker has covered until the book is conceived. István Cene gál, who has learned the techniques of the classical masters and made many experiments, has gone through an immense technical development to present hyper-reality in an absolutely perfect way, while he retained his original way of thinking – presenting the world exactly as we see it. His brush renders everything which exists or can become possible and what light and shadow can show to us. It is not moments that he wants to capture. He wants to depict the eternal moment in such a way that it will catch our attention immediately, give us joy in life and make us aware of what we see around us.

It is really remarkable how he achieves this goal. In his painting Reflection a small blonde girl is squatting by a stretch of water. She almost makes a dent in the water but does not get below the surface. With her middle and forefingers she creates tiny ripples in the water. The light is glittering white on the back of the bright red shirt which she wears. The rays of the sun are cast in front of the image of the girl and they cross the line of ripples, so that they make a division in the picture. This feeling of division is further increased by the fact that the surface closer to us is almost perfectly smooth, while the rippling rings are beyond the borderline of vision. We may even think of Moses opening a passage through the water, or Jesus Christ walking upon it. Immediately we are in a world of the Holy Bible. A human being, a creature of God, is playing with His materials. Furthermore, on the right side there is a bank covered with sand and grass above which the darkness, dominant in the upper region, becomes narrow. There is a line, starting at the little girl’s elbow, which draws our eyes towards something that is completely uncertain, because it is difficult to tell whether the surface of the water continues or it reflects the shadows of the sky. In the latter case the bank might even serve the role of a bridge to God, or to gods. Can we pass by a presentation of such real unreality? Especially when the vision he depicts is imprinted in our minds and stays with us. 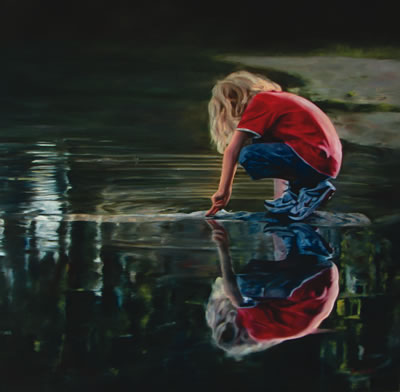 Water surfaces affected by gales and strong winds are especially suitable for showing the play of light. An excellent example of this is the painting Balaton, in which the light of the huge setting sun – piercing the row of light clouds – changes the rippling surface of the lake into a sea of bronze, silver and gold. We should feel fear at the sight of the rough forces of nature, nevertheless the harmony of the picture changes this feeling into calmness. We are not worried about those who are on the water far from the shore, either. The shining permeates not only the canvas but us, the viewers, as well.

A vitally important and thought-provoking element in István Cene gál’s activity as an artist is that he depicts statues and sculptures erected in squares and public places in different contexts, often in a sort of haze of different colours. This way he tells us, the viewers, what he finds important in the history of fine art. The picture of the bronze statue of the famous poet, Attila József – as the poet is sitting on the steps of the wharf – is a good representation of the literary heritage. In the picture Lesson of Literature there is a small child with tousled hair in front of the statue, like a cherub. Attila József gazes at the space in front of him and the child looks at the poet’s coat. Would he like to try it on? In the picture No Shriek of Mine Attila József is accompanied by several figures. The same atmosphere of uncertainty and gloom can be felt in the picture of the immortal hero of Cervantes, Don Quijote de la Mancha, and his faithful servant. Don Quijote does not even hold the reins of his horse while he ambles along a country road. In his left hand there is a lance, while he lifts his right hand in a greeting. He does not wear a hat because he does not want to have anything between his head and celestial inspiration. Sancho Panza is right behind him, riding his donkey. In his right hand he holds the rein and a shaving bowl which his lord uses as a helmet. He is always ready to help to bring the exorbitant sense of mission back to the soil of reality. However, here the soil is not real and the scenery is definitely bleak. Imagination has to fill it in with vegetation and life. 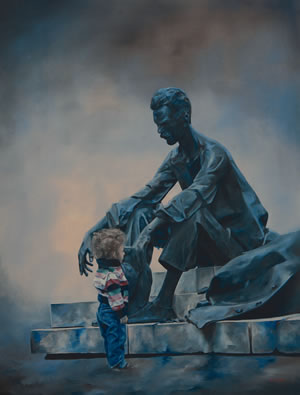 There is also a significant series of paintings in which different kinds of fruits (apple, lemon, orange, etc.) come into contact with water, splitting its surface. István Cene gál catches the very moment when a solid object reaches the surface of the liquid and starts all sorts of movements in it, in every direction. He depicts what we are simply not able to perceive around us in our everyday life. In the picture we see a layer of time and space which the eye can only catch as a part of a process and the mind is not able to comprehend. The same hyper-reality can be felt when he shows the spring bloom of trees in his pictures. In these paintings the flowers of cherry, apricot, plum and apple trees are depicted with such details that we feel that we are holding a magnifying glass in our hand. We almost smell the odour of the fruits and hear the soft buzzing of insects. A similar atmosphere can be felt when we look at the pictures depicting a vine arbour. In the picture with the title Blue Grapes II, for example, there is even a grape which has already been tasted by a wasp. We see clearly how heavy the cluster is and how it embraces the vine beneath it. In the picture Autumn Lights in my Garden II we see how the tendril catches the stalk of the plant. In the pictures everything is magnified, brilliant and casts a sweet idyllic atmosphere.

When we look at the paintings of István Cene gál we are filled with a kind of joy and serenity that we might find in the Garden of Eden, and this feeling permeates right to our soul and bones. These pictures take us to the birth of time, to the period of absolute beginning. We reach this original moment of creation through the atmosphere of the pictures. These paintings introduce us to a world of wonder saturated by the majesty of creation.